It is NOT show season, so of course my greenhouse is full of blooming plants.  The top two bloomers of the summer are the vandas and the dendrobiums.  The Neos have pretty much finished showing off for the summer although there are a couple still in bloom.  Now is the time, though, for the Neo hybrids to really shine…and smell!  Good, I mean.  Here are a few stars:

Probably the most popular and well known of the Neo hybrids is Neostylis Lou Sneary (Neof. falcata x Rhy. coelestis) which produces fragrant white flowers heavily accented with blue or purple.  The most famous Lou is the cultivar ‘Bluebird’ which is remarkable for its truly blue, not purple, color.  That being said, it’s not my favorite because most of the ‘Bluebird’ inflorescences I have seen seem a little…wonky, maybe.  The flowers don’t have the best form, in my opinion.  There are lots of Lou’s out there, though, who are more purple that have truly spectacular form.  I prefer those, myself.  And why is Lou so popular?  He’s SUPER EASY to grow in a pot, basket, or mount and he WILL bloom for you, even in pretty darn low light.  If you have Lou already and are looking for a close relative, some genius (no, not me) backcrossed Lou to a pink-blooming Neo to create Neostylis Baby Angel.  The kicker is that it can bloom out pink or blue–just as with any baby, you don’t know until it appears!  Other than the flower color difference, you will find that Baby Angel is slightly smaller in stature than Lou because of the double dose of Neofinetia, but care is exactly the same. 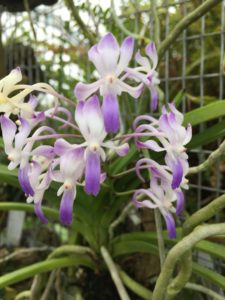 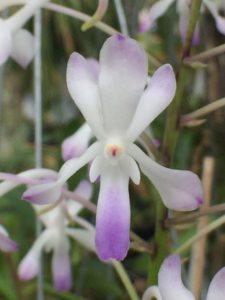 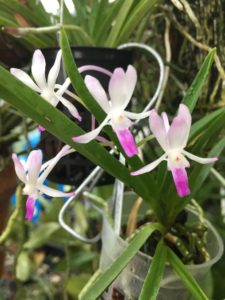 A new hybrid to NWO is Vanda Lucknow (Neof. falcata x V. testacea) which is also in full bloom and spike for us.  The plants are INCREDIBLY vigorous growers, and the bunch that I potted up about a month ago for the fall season are already growing roots into each other’s pots.  It produces long spikes of delicate yellow and white flowers that smell heavenly.  I have some in pots and others in baskets, each doing equally well.  Unless you have a greenhouse or a place where it’s easy to water, a pot works best for all these vandas. 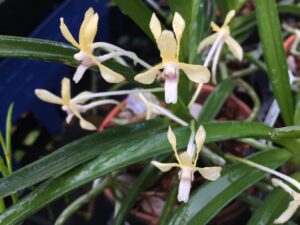 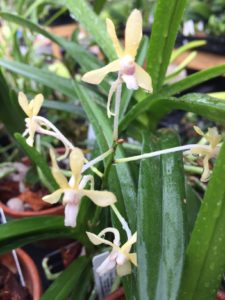 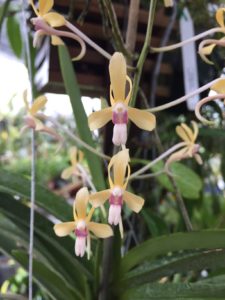 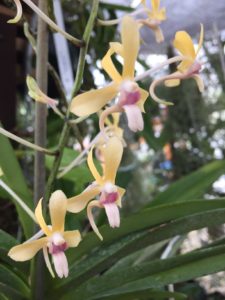 Green Light (Christensonia vietnamica x Neof. falcata) is another hybrid that really got the best in form from each parent.  The flowers are like Neos on steroids with more substance, bigger size, and a truly impressive spur.  The plant itself is distinctive, too:  much more upright with shorter leaves (more like the Christensonia) than other Neo hybrids.  Must be the effect of the mama.  For form, I like this one and the Lucknow better than Lou/Baby Angel, but I admit Green Light does not have the blooming reliability of the others.  (Update as of October 2018:  the plants are now spiking like mad!  I think they needed to reach a larger size than the other Neo hybrids to start blooming reliably.) 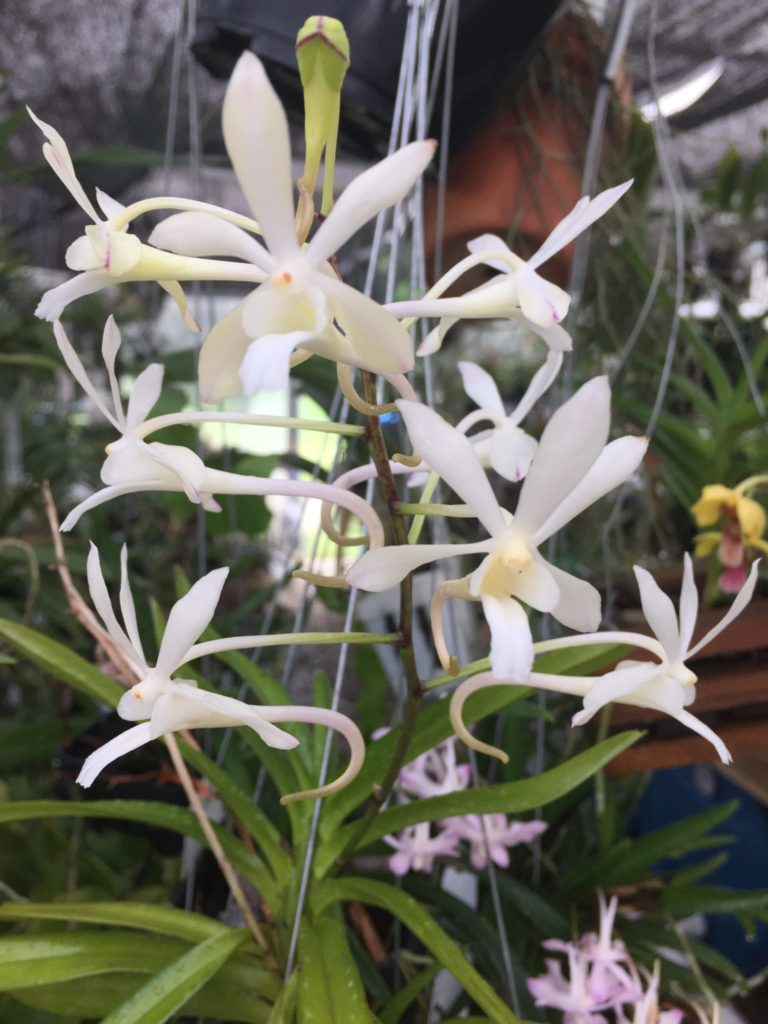 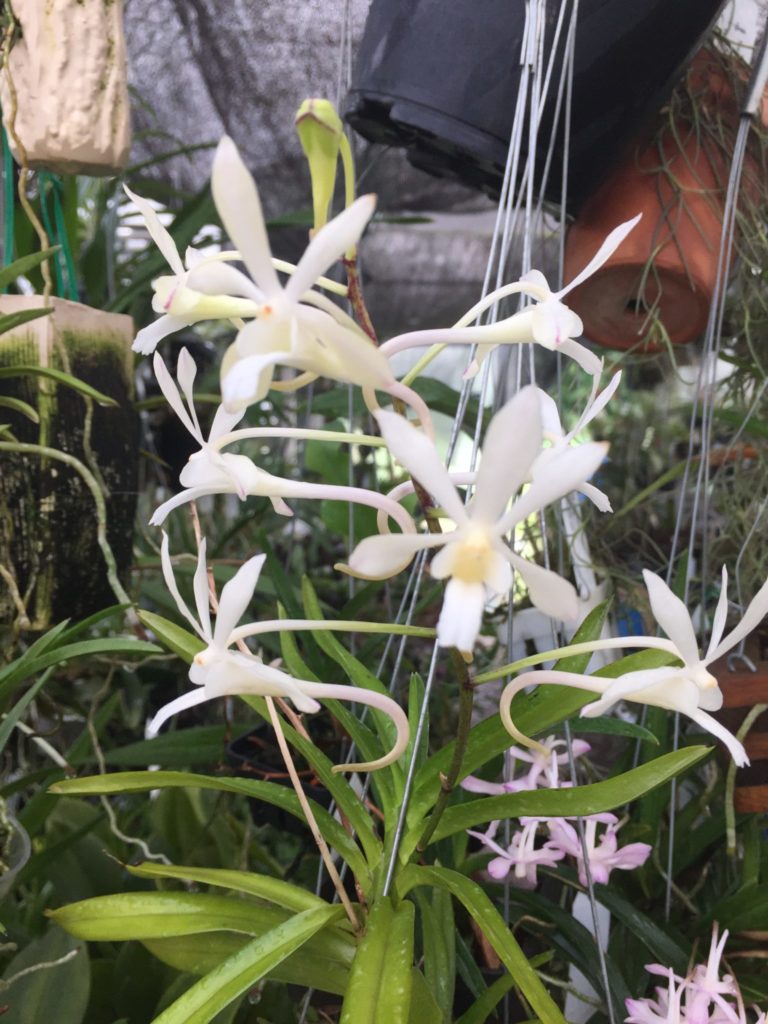 Another great bloomer is sweet little Vanda Hiroshima Choice (Neof. falcata x V. flabellata).  Like Lucknow, I potted these guys up for you home growers, and they are going to town.  All the HC’s have pink/purple, brown, and spots in their flowers thanks to the magnificent colors of the flabellata parent, but the depth of color and degree of spotting varies.  I really like these guys a lot.  They are conveniently compact, similar in stature to Lou Sneary, and also very easy to grow and bloom.  There aren’t a whole lot of spotted Neo hybrids, so if that’s your thing, here’s your guy.  And yes, he does smell good, too. 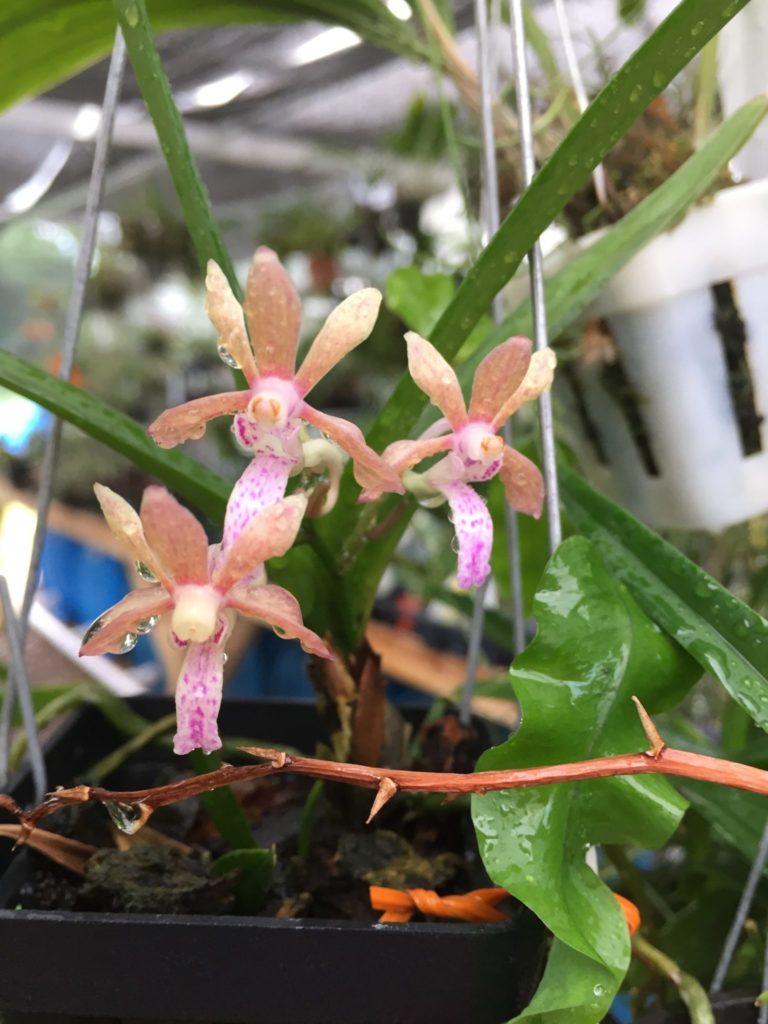 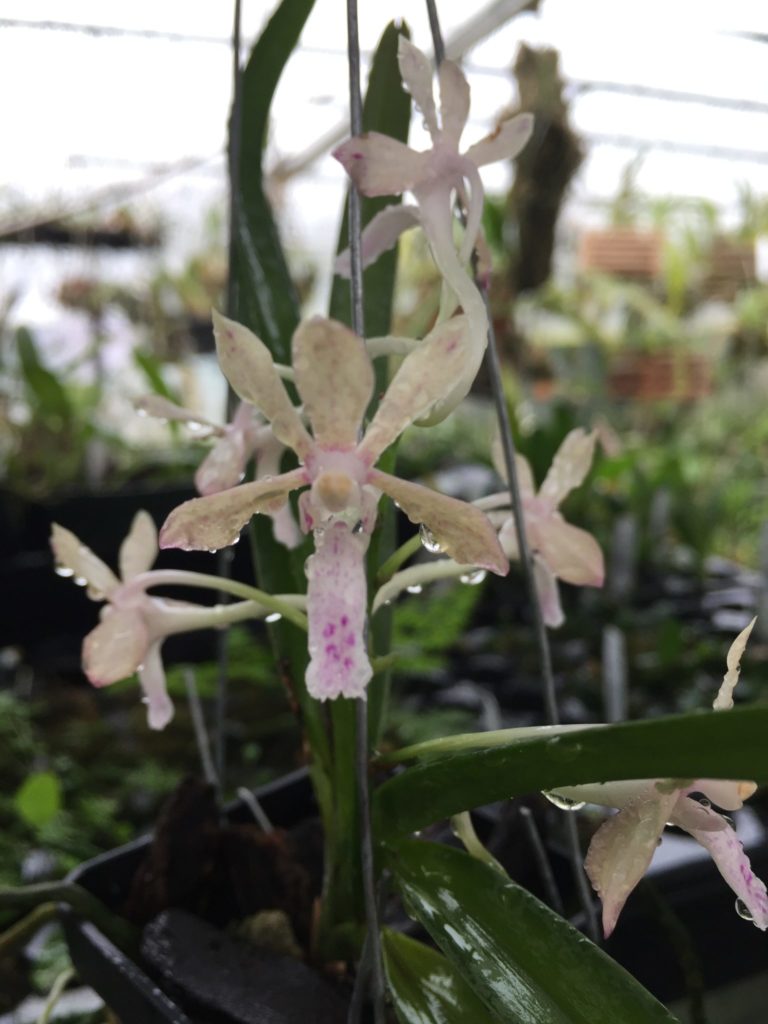 That’s enough to get you started thinking about increasing your summer-blooming collection.  There are more excellent vanda hybrids out there, so don’t be afraid to try them.  They tend to be really vigorous growers and bloomers, and these guys don’t take up a lot of room.  You can grow them inside or out for the summer, and they will be very happy in any window (though north would be least preferred) of the house over the winter.  They will take much lower light than you think and still produce flowers. 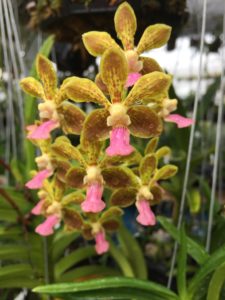 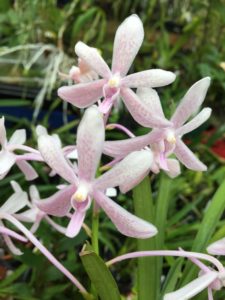 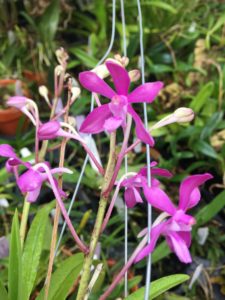 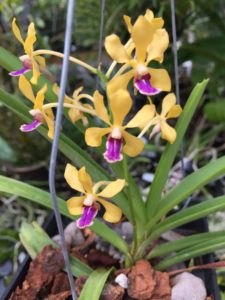