I have been remiss on writing you.  My excuse:  overscheduling!  Between Kevin and I, we did 13 shows between mid-January and the end of March and I gave seven additional talks on top of that.  I also spent an incredible week in Texas (five flights in seven days) at the beginning of May, and I went to Redlands the week after that—two firsts in one month.  I think the longest I’ve been at home since the beginning of the year is about two weeks.

But enough about me—let’s talk orchids!  Simply put, we have never had so many, and to say that we have diversified is an understatement.  While Japanese orchids continue to be the species in greatest supply (i.e., Neofinetia falcata, Dendrobium moniliforme, and Sedirea japonica), we have at least a dozen other species of Dendrobium (including Dockrillia species), at least 10 Neo hybrids and additional Vandaceous hybrids on top of that.  Then there is an assortment of Cattleya species and angraecoids. What you might be surprised about, though, is the variety of South American species we have—Restrepia, Masdevallia, Dracula, Porroglossum, etc.   I have also developed a fondness for Bulbophyllum, and I am acquiring more of those guys, too.  The hardest part for me is getting them all on the website, but I’m going to work on it during these dog days of summer when being in the greenhouse is not so fun. 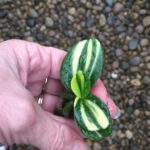 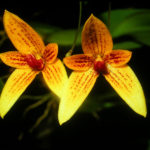 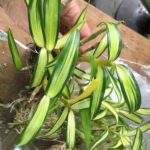 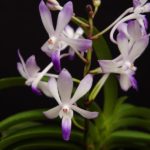 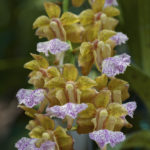 Many of you may wonder about the suitability of my plants to grow in your conditions.  In winter, all orchids live in the greenhouse which varies in temp from a low of 56 to a high of 65-80 depending on how much sun we have.  As spring brings warmer temperatures, the low remains 56, but the high can reach into the high 80’s as more sun and higher ambient temperatures make it harder to keep temperatures below 80.  When night temps stay above 50, we move the more cold-tolerant plants outside for the rest of the summer.  They spend their days under two layers of shade cloth and enjoy the daily breeze.  However, there is no additional cooling system—temperature-wise, they get what they get.  This includes the cool-growing species:  they are placed in greater shade to keep them happier, but I have not had plants die because of the heat.  The warm-hot growers, meanwhile, spend their summer in the greenhouse where the doors and windows stay open 24 hours a day to improve circulation (fans blow as necessary) and try to keep the temperature down to a reasonable level.

Where do the Neos live for the summer?  This year, they are staying in the greenhouse.  A couple years ago, I found that some Neos I had taken to Virginia showed noticeable growth after just a week in those super hot temperatures.  In Japan, growers do not move their plants in and out of the greenhouse, either.  They get incredibly hot in the summer—over 100 degrees F.  I mist mine daily, and if it’s really hot, I’ll hit them twice a day.  They are Vandas, after all, and Vandas do love the heat.  I would advise, though, keeping the light much lower in the summer.  This was a change suggested to me by an excellent (probably the best) Neo grower in the US, and it has done wonders for the color and leaf expansion of my plants.  I think my other orchids appreciate it, too.  The main drawback to having them in the greenhouse is the need to water them myself rather than having Mother Nature do it.

I hope you’re having a wonderful summer and that your plants are growing like mad.  Try to take a few minutes each day to tell them how much you love them and keep a keen eye out for bugs!