A hybrid is cross between two species.  Generally, Mother Nature disapproves of hybrids–species that are dissimilar genetically may be able to exchange gametes (eggs and sperm), but often they will not produce viable offspring.  Plants tend to be much better able to hybridize than animals, though, and in the process we can see a phenomenon known as “hybrid vigor” which means that the hybrid offspring is bigger or in some way healthier than either parent.  Pretty cool.  The other result is the creation of a unique organism (or bunch of organisms) that has characteristics of both parents.  And THAT is the reason orchid enthusiasts love to hybridize!  We want the compact nature and scent of Neos with the color of an Ascocentrum, for example.  Neofinetia x Ascocentrum = Ascofinetia.  Can you hybridize any two plants?  Sadly, no.  Again, it’s a matter of the compatibility of their chromosomes, among other things.  But let’s enjoy these success stories! 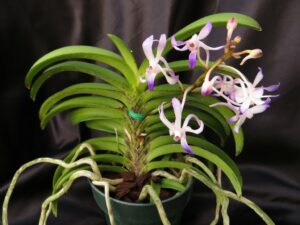 Like all the hybrids I’m featuring today, Lou has a Vanda-like appearance.  The flowers are rounder than a Neo but carry Neo’s intoxicating scent.  An added benefit is that it will rebloom within a given year! 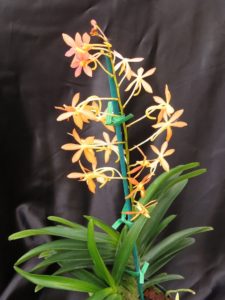 I wish the color came through better on this little gem.  From a distance, it’s apricot, but up close you can see that it’s a light orange with an overlay of pink.  Very delicate-looking flowers held upright on tall spikes.  Sadly, it is not fragrant (at least mine are not). 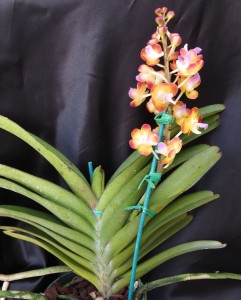 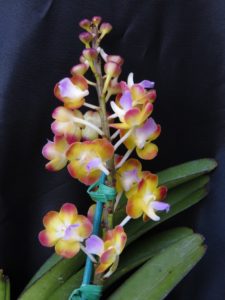 Well, if you can cross two species why not cross some hybrids with species?  No problem.  This is a “compound hybrid” meaning that at least one of the parents is a hybrid itself.  It gets tough to follow the lineage after a while.  The color on these flowers… well, WOW is all I can say.  Once mature, the flowers have a lovely fragrance.

Hope everyone is enjoying their summer and that you get a chance to enjoy some hybrid vigor!